You are here:Home . The Catalog . Silverware . Rare and spectacular covered vase by the silversmith Odiot

Rare and spectacular covered vase by the silversmith Odiot

Rare and spectacular covered vase, on spreading foot chased with Renaissance style motifs of cartouches and beaded garland, the baluster-shaped body repoussé and chased with a scene featuring the myth of the mermaids seducing the centaurs surrounded by angels playing musical instruments, the side handles shaped as Mannerist winged female bust with mask terminal; the neck decorated with foliate scrolls and centred with a vacant shield beneath a female mask; the domed cover with gadrooned terrace and cherub centaur final.

ORIGIN
This vase was received in 1876 by Count Frederick Lagrange successively deputy then senator but especially owner of a stable that was to win many successes on the racetracks. Count Lagrange dies without descendants on November 22, 1883 and is present at his death only Baron Georges Napoleon Baude, retired ambassador who will have six children; unfortunately the heirs of Count Lagrange are unknown and it seems likely that this vase was sold after his death. 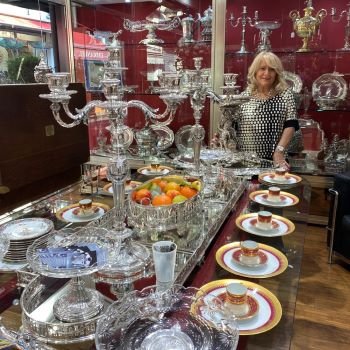 www.oliviasilver.com | This email address is being protected from spambots. You need JavaScript enabled to view it.
back to top