Much quality in this American painter, he offers us here a magnificent oil on canvas depicting a View of the Quai Henri IV in Paris late-19th-century, with the Cathedral of Notre-Dame de Paris in the background.

In fine original condition, on his original canvas and patinated wood frame.

Beautiful painting sign on the lower left by Frank Myers Boggs late-19th-century circa 1890.

From Ohio To Isigny; The Almost Impressionist Life Of Frank Myers-Boggs.

When Frank Myers-Boggs returned to America after studying art at the École des Beaux-Arts Paris, he was excited to share the fresh new painting techniques he had learnt.

Frank was mixing in the world of revolutionary artists Claude Monet, Alfred Sisley and Eugene Boudin, who influenced him but he was developing his own style.  He favoured dark, neutral colours; greys, browns and blues.  His sensitive landscapes of rain drenched streets and misty seas were painted using limited tones, highlighting the quiet atmosphere he so admired.

Frank was not alone in appreciating this softer side of nature and ‘Tonalism’ has found a small place in art history.

Obsessed with the subtle changes in colour of seas and skies, he frequently travelled to Normandy to study and paint along the coast.  Normandy proved a fine source of mist and rain. Frank restlessly changed his lodgings, renting a series of rooms in fishing villages and small towns to be close to the subject of his many paintings.

He was due to travel home, what would America think of his art?

Born for art not business

Frank was born in Springfield Ohio on 5 December 1855, moving with his family to New York as a child. His father was in publishing and the family lived comfortably. Frank was sensitive and creative; he would not be following his father into business.

A gifted draughtsman, at 17 Frank was employed as an illustrator creating wood engravings for Harpers magazine.  He was drawn to the theatre and after working as a set painter at Niblo’s Garden Theatre with French scenery-painter M. Vauglin, he determined to study in Paris and left America in 1876.  However in Paris Frank was unable to secure an apprenticeship, so he enrolled at the Ecole des Beaux-Arts, and studied figure painting under renowned painting master Jean-Léon Gérôme.

Despite many months of hard work it was clear to the master that Frank would never excel at figure painting.  He encouraged the young student to paint landscapes directly outdoors, en plien air, so in 1877 Frank gathered up his paints and headed for Dieppe on the north Normandy coast. Away from the noise and dirt of Paris Frank thrived.  The fresh air, mercurial sea and daily drama of the fishing fleet enthralled him.

He painted, and he painted well.  Frank returned to Dieppe for three years in a row then explored the more remote coastal villages of Normandy and Brittany ‘where he sometimes lived for weeks on nothing but pears and bread’.  Each summer, painting in all weathers, Frank’s skill as a marine artist improved and Paris galleries began to enthusiastically promote his work.

Increasingly confident, Frank’s townscapes also shone and in 1880 his first painting to be chosen for exhibition at the Paris Salon was of church at Nemours.

The following year two Dieppe scenes won approval from the Salon and aglow with this success, Frank traveled back to his home country.  There he discovered the brave new world of America in the late 19th century was going in a different direction.  Unimpressed by the wild ideas the young American artist bought over from Europe, his work was not well received.   Reports suggest the National Academy of Design refused to display his paintings.  Frank would not change his style to please their narrow minds and quickly traveled back to Paris, his ties to America increasingly tenuous.

In just a few months Frank would be celebrating remarkable success. Two of his paintings, ‘La Place Saint Germain, Paris’ and  ‘Le Port d’Isigny (Calvados)’ were chosen for display at the Paris Salon of 1883.  Both created a sensation and were snapped up the French government to be displayed at the Musée du Luxembourg, a major public Paris art gallery.  This was a rare accolade for any artist, more so for foreigner not yet 30, but Frank had the gift of painting Paris, and France, as it liked to see itself.

That year Frank exhibited and painted in London, enjoying the restrained colours of the river Thames and the subdued greys of the city.  Perhaps because the English are so familiar with rain they understood his muted colour palette and his work sold very well.

A description of Frank survives from this time in an interview with Art Amateur magazine in 1884:

“..a tall, slender, loose-limbed, nervous American, bright-eyed, meagrely bearded, and a constant wearer of spectacles. He is in his thirtieth year; he hails from Springfield, Ohio; he has very considerable talent; he is more or less unknown in his native country, and in France the State does him the honour of buying his pictures.”

For reasons unrecorded, in 1884 Boggs gave up his apartment in Paris and left for New York, only to return a month later. He would not live in America again. He returned to travelling across Europe, notably Holland, Venice and on to North Africa. Many paintings have been lost from these travels as he would exchange them for board and lodgings.

Frank displayed his art to a rather more amenable America  in 1885.  He was awarded a bronze medal for ‘A Fishing Boat (Dieppe)’ and a cash prize of $2,500 for ‘Rough day, harbour of Honfluer (now in the Museum of Fine Arts, Boston).

His successes continued; during the 1889 Paris World Fair he received a silver medal. Then at the World’s Columbia Exhibition in 1893 his paintings hung alongside American impressionists. Frank’s work would be showed at the Paris Salon for the rest of his life.

The artist Jean-Baptiste Antoine Guillemet, a contemporary of Frank’s called him “a very good painter and a perfect Parisian” but there were occasional grumbles from others that his work was too much like Eugène Boudin but without Boudin’s vision and skill.

The girl from the Basque country

Frank’s private life is a mystery, but we know he was fortunate enough to find love.  Not with a sharp Parisian girl, but with Joséphine Gaintza, a country lass from Urrugne in the Basque country of South East France. His love was returned and when Frank implored Joséphine to run away with him to Paris, she did.  Their first child Jane was born in 1895, then a son who did not survive, another daughter Mary in 1898 and a son Frank-Will (also an artist), in 1900.  Frank finally married Joséphine in 1917.

Fluent in French and known fondly as ‘l’Américain Parisiané’ Frank became a French citizen in 1923. His slim form, swathed in a cloak and wearing a fine all-weather hat, was a familiar figure in Montmartre.

Never strong, long hours stubbornly painting in all weathers affected Frank’s health. He was unwell when in early August 1926 the French authorities announced he was to be awarded the Legion d’Honnour for his contribution to French art.  Frank died on 8 August 1926 at Meudon, Hauts-de-Seine, just two days before the formal ceremony was due to take place. He was awarded the Legion d’Honneur posthumously.

Frank painted with seascape artist Johan Jongkind and occasionally with Monet, Sisley and Renoir, yet his name is rarely mentioned in their memoirs or others’ accounts of their careers.  Frank’s loose brush strokes and fascination with the transitory nature of light echo Impressionism, but while they let colour in, Frank perhaps pushed it away.

Is Frank Myers-Boggs an Impressionist? His work is generally thought to sit just on the edge of this juggernaut art movement. Certainly his art fell out of fashion in the 20th century.  Frank has his admirers, but his work can be picked up for a few thousand pounds, not the millions of his contemporaries.

Sketches, oils and watercolours by Frank Myers-Boggs can be found sitting quietly in a number of European and American museums.  They do not shout out and can easily be overlooked (especially those left gathering dust in tidy archives). But if you come across one, give it a few minutes of your time. Stand back and let the delicate colours come alive, and see with Frank those misty mornings, admire the soft light shimmering on a quayside splashed by choppy waves, and hear in your imagination the distant sounds of Paris, and Normandy.

Galleries and museums that hold art by Frank Myers-Boggs include: 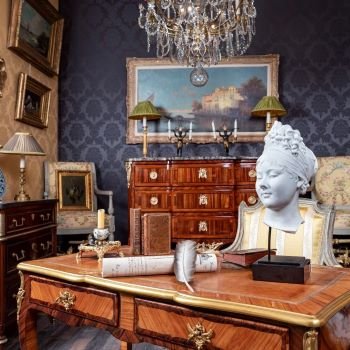