Gladiator By Pierre Lenordez (1815-1892)
Bronze sculpture representing a horse, bay-brown stallion, named "Gladiator", born in 1862, by Pierre Lenordez.
Bronze with brown patina
Signature of the sculptor "P.Lenordez" on the naturalistic oval terrace
Titled "Gladiator"
Cartel on the terrace with title, date of birth, prize list and name of its owner
Period XIX th century
Perfect state of conservation and patina

This stallion belonged until 1871 to Count Frédéric Lagrange, to whom he was born, in Dangu (French commune, located in the department of Eure, in the Normandy region).

Trained first in France near Compiègne, then sent to Newmarket (town of Suffolk in England), known for its links with the horse racing world, with trainer Tom Jennings, he started in the fall of his 2 years, but without really shining, winning only once in three outings.
But at 3 years old, he asserted himself as the best colt of his generation, Gladiator won the "2000 Guineas", then became the first foreign horse to win the "Epsom Derby".

Back in France, where he enjoyed great popularity due to his victory "Across the Channel" (he was nicknamed the "Avenger of Waterloo"), he won the "Grand Prix de Paris", created two years earlier, ahead of an enthusiastic crowd of 150,000 people.
He crosses the round again to compete in the "St. Léger" at Doncaster, where his victory allows him to snatch the British Triple Crown, then continues his victorious round trips with a victory in the "Grand Prix du Prince Impérial", the future "Royal Oak Prize".

Gladiator continued his career at the age of 4, asserting himself more and more domineering. He will thus win the "Grand Prix de l'Empereur" (now known as the "Gladiator Prize"), or even the "Ascot Gold Cup", with 40 lengths in advance.
He ended his career at the end of his 4-year-old year, after 16 wins in 19 races.

A large bronze sculpture representing "Gladiator" is present in Paris, near the entrance to the Hippodrome de Longchamp, in homage to this extraordinary horse.

Pierre Le Nordez is considered one of the best specialists in equestrian sculpture of his time.

He acquired a certain celebrity by producing sculptures, great winners of horse races, such as "Monarque" (Normandy Museum in Caen) or "Gladiator" (Château-Musée de Saumur), or even scenes with the horse as the main subject. . He began exhibiting at the "Salon" in 1855 with a wax of "Baron", horse of the imperial stud farm in the Bois de Boulogne. He exhibited there four more times until 1877.

He is the author of the horse of the equestrian sculpture of "Joan of Arc" commissioned by his nephew, Albert Le Nordez, for Montebourg, his birthplace. Other monumental statues can be seen such as, "The monument to Jehan de Grouchy" (Fonte) on a place in Harfleur (Seine-Maritime) or "Piqueur à cheval" (Fonte, 2.45 m) in the courtyard of Château Perrier in Épernay (Marne).
Pierre Le Nordez also distinguished himself in the subjects of history which were very popular in his time.

One of his most important works is "Le Capitaine d 'Estouteville during the defense of Mont Saint-Michel" (Plaster, Avranches museum). His knowledge of the horse encouraged him to write a book on hippology published in 1886, “The Horse, its conformation and its breeding”. Back in Normandy, Pierre Le Nordez taught sculpture for ten years at the municipal school of Fine Arts in Caen, training many students, the most famous of which is Arthur Le Duc, who will reveal himself to his ride like a great equestrian sculptor. 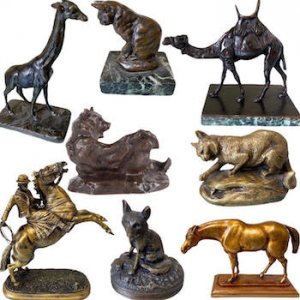